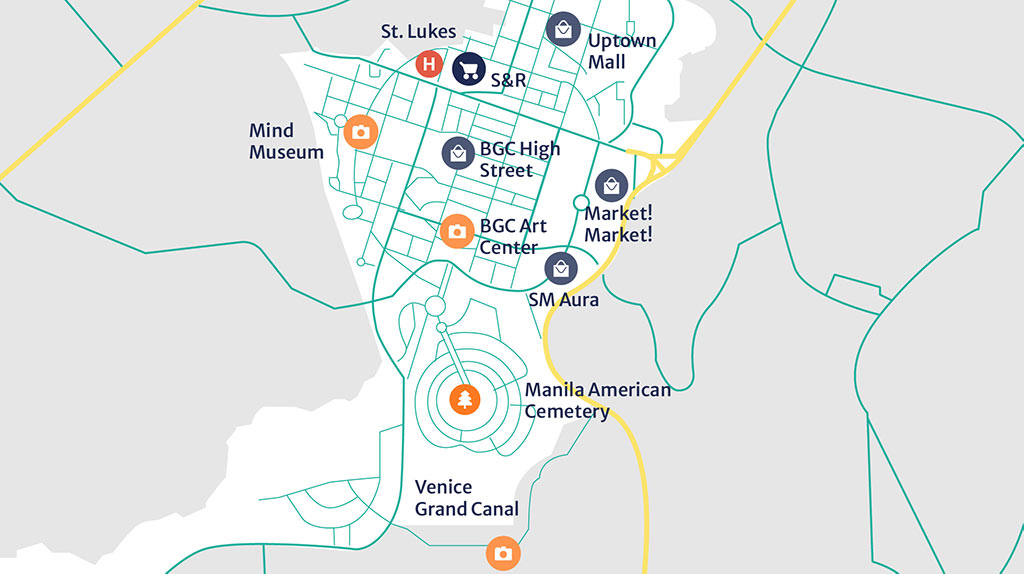 Metro Manila, with its busy streets and bustling commercial centers and business district, can truly be overwhelming. The daily hustle and bustle can make one long for some respite that doesn’t involve a trip out of town, which can be a hassle in itself. Good thing there’s a place like the Bonifacio Global City for those who want some well-deserved R&R in the metro.

Located in Taguig City, Bonifacio Global City or BGC is an “oasis” for tired hearts and minds. Its high-rise sceneries, carefree walkability, cleanliness, and vast options for recreational activities are just a few of the reasons why BGC has become one of the most sought-after areas when investing in properties in the country.

In this neighborhood guide, we will discuss everything there is to know about Bonifacio Global City, whether you’re planning to visit for the weekend or making it a permanent home.

If you have visited Subic Bay or the Clark Freeport Zone, then you most likely have seen the beauty that comes from preserving historical structures including those built during the period of American colonization. Like these two locations, BGC was also used by the Americans as a military base when they acquired it in 1902. It was originally named Fort McKinley after U.S. President William McKinley.

In 1949, years after the Philippines gained independence, the United States turned over Fort McKinley to the Philippine government. Eight years later it was used as the Philippine Army’s headquarters and was subsequently renamed Fort Bonifacio after the courageous Filipino hero and Father of the Katipunan, Andres Bonifacio.

In the ‘90s, Fort Bonifacio was handed over to the Bases Conversion Development Authority (BCDA), which started its conversion into an area for civilian commerce. Over the next decades, private corporations helped reshape the image of the district from that of a war-torn camp to one of the most attractive places in Metro Manila today.

To the north of BGC is Mandaluyong City, Makati City to the west, the Municipality of Pateros to the east, and the rest of Taguig City to the south.

Why Should You Visit or Live in Bonifacio Global City?

Although there is nothing spectacular about the geography of Bonifacio Global City, where it shines is in the abundance of rich architecture and its modern landscape. People who enjoy sightseeing and looking at the “night lights” from afar will surely enjoy the district from a much closer perspective.

Looking for a job? Check. How about some designer clothes? Check. Maybe some fine dining? Check. BGC has it all whether you’re building your career, love to party, or want to be healthy. It’s like Wall Street, Fifth Avenue, and Shibuya all rolled into one. BGC is home to companies like Smartmatic Philippines Inc., Manila Water Company Inc., and Sony Philippines Inc., among others. Its shopping malls have everything you need.

A different perspective from the rest of Metro Manila

Most parts of Metro Manila may look too industrialized and in seeming disarray as everything seems to be crammed in one place. That is where BGC differs, thanks to meticulous planning.

As a master-planned central business district, Bonifacio Global City combines the look of work and leisure effortlessly. You also won’t see heaps of garbage around as the city’s sanitation system is working beautifully, which is why it is literally such a breath of fresh air for those people from outside BGC.

When you go to BGC, you will notice that a lot of people walk there, going one from one building to another. This is because it is safe and feels great to do so. There is ample space for foot traffic, and crossing the streets are safe thanks to clearly marked pedestrian lanes and working crosswalk lights. You will also see joggers frequently. The district has even put up a jogging path as part of its Greenway Park, which is hailed as the longest urban park in Metro Manila.

Aside from walking and jogging, you can play badminton, throw Frisbees, and other fun stuff, making it a great place for people maintaining a healthy lifestyle. You can also rent bikes and scooters via the Moovr app if you finally get tired from all the walking and jogging.

How To Get There

The general rule in Metro Manila is when you don’t know how to go to a certain place, use the Grab Superapp. Taking a Grab ride to BGC can be expensive though, especially when you come from afar. From Intramuros in Manila, it can cost you P400.

Taking a regular metered taxi is also an option but it costs almost the same as Grab. Just remember that the flow of traffic can cost you more compared to a Grab ride, which is precalculated before booking. Be wary of taxi scams too—look at the meter frequently to see if it’s going unbelievably fast. Stay alert.

Walk over to the BGC Bus Ayala Terminal.  It’s located at the ground floor of the EDSA Ayala Bus Terminal. Buy a ticket and choose among the different BGC bus routes to get you to where you’re going.

Shopping is what BGC is mainly famous for. The area has a lot of convenience stores like 7-Eleven and Ministop if you’re in a hurry and will only be buying a few items. But if you’re restocking your home supplies, looking for toys, clothes, or gadgets, here is a list of the top shopping centers in the district:

BGC’s affluent streets are also filled with restaurants offering various cuisines to satisfy the taste buds of different people and live up to its Global City name. The song ”Le Festin” by Camille will probably play in your head when you see these must-try restaurants in the area:

Walking is the best thing to do in a safe place like Bonifacio Global City, especially since most popular buildings and establishments sit side by side. But these buildings are actually bigger and farther apart than they look and walking may be tiring for some people. In this case, here are your travel options when inside BGC.

Hailing a metered taxi is still one of the most cost-efficient ways of going around BGC. The base fare is at P48 and can go up to an average of P100 depending on the distance. You can get a taxi almost anywhere but be warned that there are drivers who turn down passengers for unstated reasons.

If you’re in a hurry and want to secure a ride to somewhere as soon as possible, then the Grab Superapp is your friend. It is more expensive than your regular metered taxi, especially when booking during a surge. But for the sake of avoiding the fuss, it is absolutely worth it.

The first thing you have to know if you want to travel efficiently in BGC is where the EDSA Ayala Station Express Stop is. It’s because it is usually where the BGC buses start their routes. There are seven routes available every day. Standard buses make their trip as early as 6 a.m. and finish at 10 p.m. so you’ll have to find a night-route bus if you’re traveling beyond that hour.

The cost of living for a single person in BGC is P48,713.49 per month while the cost for a family of four is P119,794.90. Do note that this may differ depending on your lifestyle, the frequency and means of your transportation, and whether you’re renting a house or condo unit or actually own the place.

Why should you invest in a property in Bonifacio Global City?

With all the great things BGC offers, the real question should be, “Why shouldn’t you?” To be honest, we can’t think of any reason why you shouldn’t, especially if price isn’t an issue.

Real estate properties in BGC usually start at a high asking price and rightfully so because of the convenience and advantages they offer. Moreover, they will only improve more in time, especially because of the continuous development plans in the area. Aside from that, properties there will surely inflate faster than other areas because of a higher demand.

Living in BGC is the Filipino’s benchmark for someone who has “made it.” But if you’re still on the journey toward your dream and aren’t ready for the high cost of owning a property in BGC yet, then you may consider renting a condo unit there instead.

Bonifacio Global City really is the place to be. Now that you’ve read our neighborhood guide, perhaps it’s time you call it home by investing in property there. We hope that we have helped you realize that BGC is the one for you.

If you need more resources like this to answer your inquiries about real estate, then head to enta.ph/resources. Knowledge is key and probably the key to your next dream house.

7 thoughts on “An Oasis in the Metro: Bonifacio Global City Neighborhood Guide”