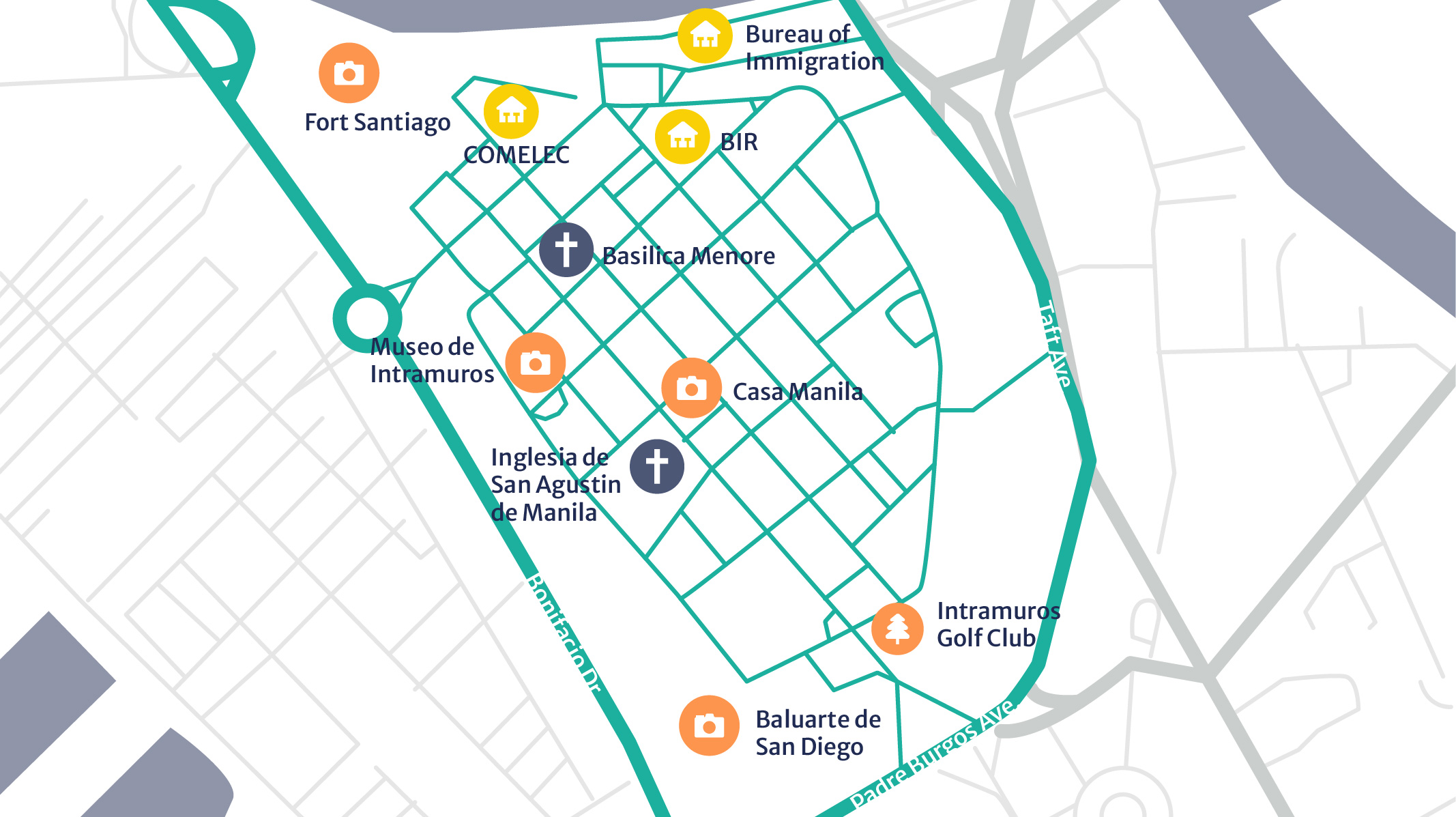 You’ve probably read about Intramuros in history books, heard stories about it from your parents and grandparents, and maybe even visited it once in your life as part of an educational tour in school. If that is the case, we’re quite sure that you haven’t fully experienced its captivating charm.

This district located right at the heart of the city of Manila was once considered the top tourist attraction in 2020 by World Travel Awards, the travel industry’s most prestigious awards program recognized worldwide. Intramuros beat other renowned destinations in other countries such as the Taj Mahal of India, the Great Wall of China, and the Acropolis of Athens in Greece, just to name a few.

Today, Intramuros is one of the most popular locations in Manila for local and foreign tourists who are looking for a unique cultural and historical experience without going out of the metropolis. With its preserved beauty, the city will truly transport you to one of the most iconic eras in Philippine history.

Founded in 1571 by Miguel Lopez de Legazpi, this fortified city built on a 59-hectare land surrounded by approximately 4.5 kilometers of 6-meter-high walls served as the capital and main political base of the Spaniards during their occupation of the Philippines.

With its name that literally translates to “within the walls,” this fortress served as their main protection from foreign intruders, boasting defensive features such as canons and moats surrounding the walls that served as the first line of defense during attacks.

Within the walls were schools, churches, government offices, military barracks, and residential homes of the most influential Spanish elites and mestizos. The structures were built with an architectural style that was heavily influenced by colonizers. During World War II, Intramuros was one of the most heavily affected areas in Manila and most of its buildings were destroyed.  Most of these structures were later rebuilt into what we see today.

There are different modes of transportation available to get to Intramuros, from buses, jeepneys, and UVs. All of these pass by the Manila City Hall on Taft Ave., which is one of the center points for commuting to and from various points within Metro Manila.

If you want a faster option, you can take the LRT (Light Rail Transit) Line 1 and disembark at the Central Terminal Station. From there you can take a quick walk toward Manila City Hall and then take the pedestrian underpass that will take you to Victoria Street leading to the entrance to Intramuros.

Once you’re there, it is advisable to just walk around since most sights are only a few minutes away from each other. But if you want an easier way to go from one point of interest to another, you can ride a pedicab that can accommodate 1-2 passengers, which would cost you around Php60-Php70.

Pedicab tours are available to take you to different historical sites around Intramuros, but you need to pay Php150 for the first hour. There are also bamboo bike rentals from BamBike Ecotours for 200 pesos per hour and bike tours that cost around Php1,000-Php1,800 pesos for a few hours.

But if you want to experience the city in a more traditional way, you can opt for a kalesa ride that can accommodate up to three passengers.

Inside the Walled City of Intramuros

Intramuros is known for its distinct Spanish colonial architectural style. During WWII, most of the city was destroyed and the structures that survived were retained and preserved through national laws that enforce regulations in architectural developments within Intramuros.

Despite the rapid modernization of Manila after the war, the buildings and the overall urban design within Intramuros were retained because of the area’s importance as a “monument to the Hispanic period in Philippine history.”

If you’re seriously considering doing a tour of Intramuros, you can go for a DIY trip so you can take your time to freely roam around the area. You can also avail of any of the tour offers that would take you around the city and give you more insightful information about the landmarks and other attractions.

Take note that there is also a thriving neighborhood inside Intramuros and real estate properties are actually for sale for those who would like to call it home. So, if you are planning to live or visit the walled city, here is a quick guide to some of the notable places of interest.

Historical Landmarks, Museums, and other Attractions in Intramuros

Historical attractions are the main points of interest inside Intramuros. From ruins, open plazas, preserved structures, and even museums where you can see the remnants of the past to food places serving a variety of cuisines, Intramuros will surely make your trip memorable.

Where To Eat in Intramuros

After a day of walking and touring around the city, indulge yourself in any of these restaurants that offer a wide variety of cuisines that feature fusions of traditional Filipino and Spanish flavors.

More than the food, the restaurants also give a specific ambiance that makes the dining experience even more special. There are also eateries and some fast-food chains available around the area if you are on a tight budget.

As part of the University belt, Intramuros is also one of the clusters in Manila that houses some of the top and oldest universities in the Philippines.  It was the location for the old campuses of University Santo Tomas and Ateneo De Manila University before they transferred to their respective locations today.

The remaining universities inside the district are the following:

As part of the capital city that is considered a center of transportation, culture, commerce, and education, some of the major government offices also reside in Intramuros. These offices include:

Aside from government offices and other facilities, Intramuros is also home to some of the following institutions:

Nearby Establishments and Destinations

The best thing about living in Intramuros is the convenience of being surrounded by numerous establishments and facilities that are within reach. Here is a quick guide to help you navigate around the area.

Other Historical Landmarks and Attractions

The whole city of Manila is adorned with historical landmarks and attractions that have different stories to tell. Just a few minutes away from Intramuros, they helped shape the cityscape over the years.

These include the Manila Metropolitan Theater at Lawton, the historic downtown street of Escolta located in Binondo, Rizal Park, National Museum of the Philippines, Luneta Hotel, Manila Ocean Park, Manila Zoo, and a lot more.

Being located near the university belt, the whole stretch of Taft Avenue just outside Intramuros is full of commercial and food establishments that offer a wide array of options for people who are on a budget and those who want to splurge.

Located right across Intramuros behind Manila City Hall is SM Manila, there’s Robinsons Place Manila in Ermita, and when you cross past Quezon Bridge, you can find the famous shopping district of Divisoria with various malls and stalls that have options fit for every budget.

Because it is located inside the capital of the Philippines, Intramuros is surrounded by some of the major government offices, universities, and other institutional facilities that make doing your business easier to achieve, whether it’s for educational or professional purposes.

The estimated cost of living in Manila is considered as the third most expensive in Southeast Asia at Php50,798 monthly for a single person and Php120,805 pesos for a household of four. This, however, may vary depending on various factors such as your needs, preferences, and whether you are renting or not.

Intramuros is one of the most interesting must-see destinations not only in Metro Manila but in the whole Philippines. And if you want to learn more about the past and the present significance of the famed walled city, you may want to check these published books for additional knowledge:

“Ciudad Murada” is an informative guide that takes us back to centuries-old memories of Intramuros by reliving its former glory through its narratives. Containing maps, old photos, and stories of the structures that have long vanished and the remaining ones, this book written by Jose Victor Z. Torres is an educational tool that unveils the city’s importance in Philippine history.

Written by Jaime C. Laya and Esperanza Bunag Gatbonton, this archival book is a collection of photographs and memories of the old walled city of Intramuros before its destruction during World War II. It contains various photos of religious and secular structures within the city that are known for their Spanish architectural character.

Intramuros is a place where past and present coexist. Despite the development in modern society and the emergence of several modern establishments in the area, it has kept its character, making it one of the most interesting places to visit and live in.

If you are considering living within the historic walls of Intramuros, may this neighborhood guide help you in deciding that this can really be your new home.

You may also visit enta.ph/blog for more informative guides and resources that will help you choose your new place and neighborhood.

18,055 thoughts on “Inside the Walled City: Intramuros Neighborhood Guide”