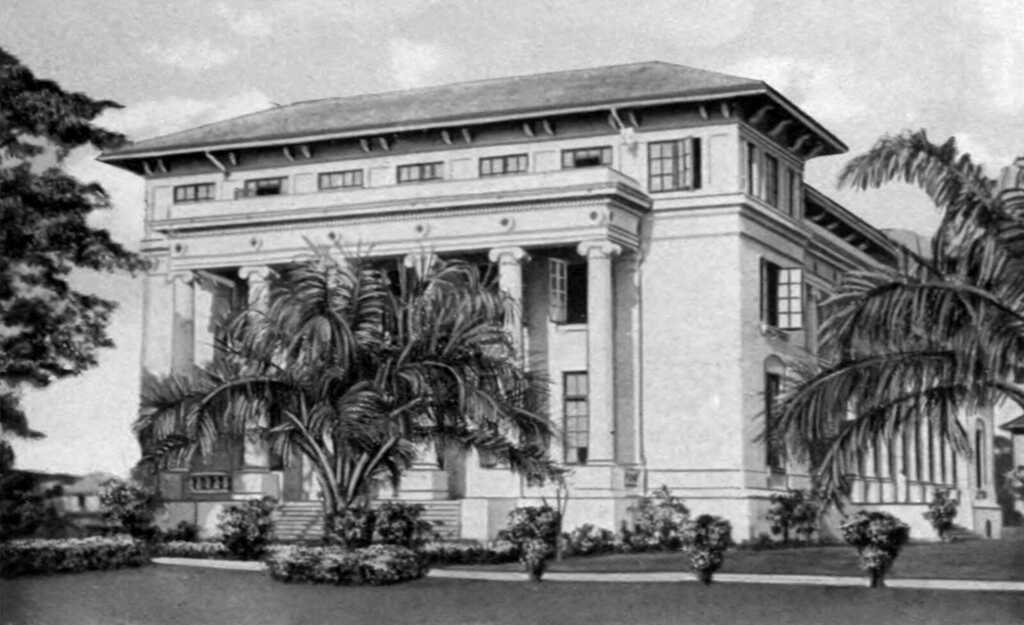 Believe it or not, haunted schools in the Philippines are fairly common, if we are to believe the ghost stories told about them. The country, after all, is home to some of the oldest universities in Southeast Asia. It also has a long history of schools being used as sanctuaries and the scene of unimaginable atrocities during times of war.

Whether you’re a lover of all things paranormal or just a sucker for traditional ghost stories, here are 13 of  the supposedly most haunted schools in the Philippines. You should, of course, take everything with a grain of salt. After all, this is just to celebrate Halloween.

Most Filipinos have heard at least one story about white ladies haunting abandoned houses or old roads. However, one popular white lady in the country resides at St. Paul University Quezon City.

Students have long talked about a white lady suddenly showing up in the campus restrooms’ mirrors. For a long time, the university’s restrooms reportedly didn’t have any mirrors to prevent the white lady from appearing. However, people could still notice traces of mirrors having previously hung on the walls.

In the late 2000s, the mirrors were said to have been returned to the restrooms because the white lady wasn’t appearing in those areas anymore. Instead, she now appears in classrooms and flag ceremonies.

Another one of the haunted schools in the Philippines with an unsettling history of ghosts in restrooms is St. Scholastica’s College Manila. The school, having been founded and managed by the Congregation of the Missionary Benedictine Sisters of Tutzing, has been known to have more specific ghostly apparitions: nuns.

The restroom on the ground floor of the College of Physics also has no mirrors, only marks that showed mirrors having once been there. A student supposedly entered that restroom hoping for a little bit of privacy. After seeing that no other person was in the cubicles, she occupied one.

As soon as she sat down on the toilet, she saw black shoes waiting outside her cubicle door. When she looked up, she saw the face of a nun staring back at her, smiling.

Like St. Scholastica’s College Manila, De La Salle University has some pretty old buildings that have stood the test of time (and war). Almost every structure on campus is said to have its own ghost.

At St. La Salle Hall, the oldest building on the Manila campus, students still fear entering the Chapel of the Most Blessed Sacrament alone. There were just too many ghost stories about it such as the ghostly murmurs occasionally heard in the area,

One particular story involves a soldier from World War II. A student was said to have once visited the chapel to pray for an upcoming exam, only to be greeted by a bloody soldier asking for help just inches away from her face.

CPU, not unlike the previous two schools, also experienced the ravages of World War II. As a result, many of its buildings reportedly have ghosts, landing it in this list of haunted schools in the Philippines.

Inside the school’s Robles Science Hall, for instance, there’s a hallway that students supposedly try to avoid. It’s because a young girl whose wrists and feet are chained can often be sighted and heard in the area.

In the Old Valentine building, on the other hand, people have seen a white lady in the men’s toilets. Footsteps can be heard in different corridors when no one is there.

The paranormal activity doesn’t end with ghosts. There are even stories about doppelgangers at CPU.

Miriam College, also used as a makeshift hospital during World War II, is known for the legend of the ghost of a hanged woman tapping people on their heads and shoulders. New students are warned not to look behind or above them unless they’re prepared to see the ghost.

Perhaps the most well-known paranormal story on campus, however, is that of a student who was bullied into a cubicle in a restroom. While her three bullies guarded the door to prevent her from leaving, the trapped girl began to cry and scream. Then she stopped.

When the bullies opened the cubicle door, the girl was gone. Later, they found the girl outside the restroom, but she had no recollection of their encounter. It’s as if she hadn’t been to the restroom that day at all.

The Ateneo de Manila University campus in Quezon City is home to various buildings–some new, some old, and some haunted. The most puzzling building is that of the old Communication Department, which is the root of an abundance of ghostly rumors and the reason it’s one of the most haunted schools in the Philippines.

People sensitive to the paranormal have supposedly seen the apparition of a mother and child in its corridors. Others, on the other hand, have seen or sensed the ghost of a Jesuit priest. And it isn’t all just talk.

There are reportedly motion-sensor cameras in the building that have detected motion but filmed no beings. With all these stories about ghosts at the old department, it’s no surprise that people have begun to view the building as a possible portal to a different dimension.

Perhaps the most haunted school in the Philippines, this 400-year-old university has a lot of ghost stories to tell. Several ghosts have been sighted at the school, but the two most popular are those of a priest and a white lady.

Benavides Park, more commonly known as the university’s “lover’s lane,” is reportedly home to the ghost of a man wearing Dominican clothes. The university’s Main Building is also said to house a ladies’ restroom where a young girl died by suicide. If you visit the school’s Conservatory of Music late at night, you might hear music even if you’re the only one there.

8. University of the Philippines Diliman

Who expected this state university to be one of the most haunted schools in the Philippines? And considering the size of its campus, it shouldn’t come as a shock that the school’s ghost stories are spread out from building to building.

Stories of ghosts with red eyes or white ladies aren’t exactly uncommon–just check out Benitez Hall or Kalayaan Hall on campus. However, the most gruesome ghost story can be traced back to the area surrounding the Department of Military Science and Tactics.

A female first-year student is said to have been raped and killed near there, with her body being found the next day. A dormitory assistant supposedly saw the student walking to her room, soaking wet. It was around the time she was killed. but. The dormitory assistant followed the student to her room to talk to her about cleaning up the mess she made, but the room was empty when she got there.

Relatively new yet this is also regarded as one of the most haunted schools in the Philippines. You’ve probably heard this one before: A professor calls out the names of all his students on the first day of class. Reaching the end of his list, the professor notices that a girl in the classroom is yet to be called. He asks the girl what her name is. Instead of replying, she stands up then walks straight through the blackboard, and disappears.

A ghost seen by a professor and a whole class would certainly become well-known on campus, and she did.

Students from this university also tend to warn freshmen against using the first cubicle in their restrooms, because that is supposedly often occupied by a white lady.

Have you heard of Ursula? She is the college’s most popular resident ghost, said to reside behind the college’s chapel. According to legend, Ursula died by suicide either by hanging herself from a nearby tree or drowning herself in the well in the school’s garden.

The garden has since earned the name “black garden,” all because of Ursula. When visiting the chapel and the black garden, try not to look back. Keep your eyes forward, and Ursula will leave you alone.

St. Theresa’s College of Cebu was founded and continues to be run by the Immaculate Heart of Mary sisters, which makes this slightly religious ghost story less of a shock.

Students talk of a group of third-year students having used the college’s viewing room, locking the room, and leaving the room’s key in the control room. As they were leaving, one of them realized she had left something in the viewing room, so she raced back. She found all of the chairs in the room were suddenly facing the crucifix hanging from one of the walls.

Who was able to move all the chairs and why they did so will probably remain a mystery.

It seems that even lovers of the outdoors aren’t safe from ghostly encounters. Most haunted schools in the Philippines seem to have an old building with at least one white lady. This ghost of St. Joseph’s College, though, was seen outside, in the daytime.

A group of students supposedly went jogging on the campus field one day in preparation for volleyball practice. Suddenly, one of them stopped and stared blankly ahead of her. The other students wondered what she was looking at because there was nothing in front of the student except the field and a few drinking fountains.

The student then said she could see a decapitated nun.

With the Franciscan Sisters of the Immaculate Conception heading it, St. Joseph’s College was bound to have a few ghostly nun stories in its history.

Restrooms continue to be a common place for ghostly occurrences for a lot of haunted schools in the Philippines. On the third floor of the Sta. Lucia Academy is a restroom in which a student supposedly died by suicide.

One night, a student entered that very same restroom because it was the only one open. Though the entire area was dark and deserted, she was set on her goal and decided not to turn back. When she was done using the toilet, she began to wash her hands. Then she heard a loud thud from the very last cubicle behind her.

As she turned around to check on what caused it, she felt cold hands wrap around her face, strangling her.

After reading all 13 ghost stories above, have you decided which one scared you the most?

Happy Halloween from all of us here at Enta.

If you want to be inspired instead of scared, do browse through our blog section at enta.ph/resources. We have a ton of articles on interesting places around the Philippines as well as on anything about real estate.